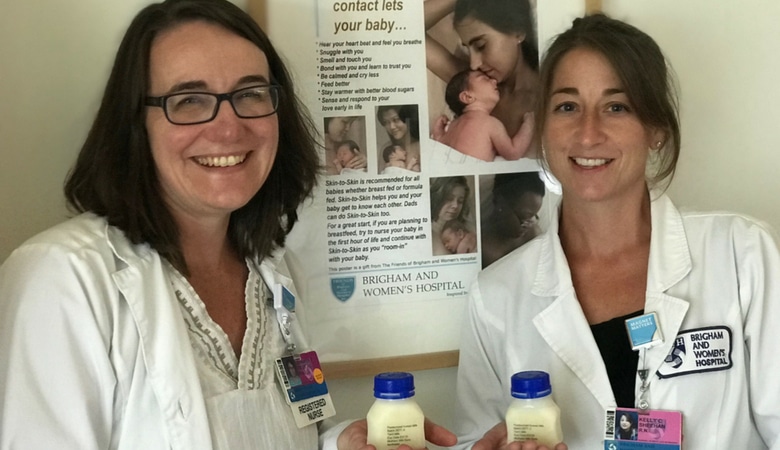 Brigham and Women’s Hospital began offering pasteurized donor human milk in its postpartum unit in 2015, after having started in the NICU in 2011. Hospitals like Brigham and Women’s often find that donor milk is an important, life-saving service for all of the tiniest patients. While it prevents necrotizing enterocolitis and other prematurity-related diseases in the NICU, it also serves as an important bridge to breastfeeding initiation for full-term babies. This helps hospitals meet their desired exclusive breast milk feeding goals as reported to the Joint Commission and most importantly, helps mothers and babies get off to their best start.

We spoke with Jennifer Riley, RN, IBCLC, Brigham and Women’s Hospital, and the president-elect of our board, to learn how her hospital expanded its donor milk program into their postpartum unit

From NICU to Postpartum: Nearly a Decade of Donor Milk Use

Brigham and Women’s Hospital started using donor milk in the NICU in 2011 and in the postpartum unit in 2013. That same year they started on the pathway of the Baby-Friendly Hospital Initiative.

“Step One of Baby-Friendly includes adopting a breastfeeding policy that encourages staff to fully support mothers in reaching their breastfeeding goals,” said Jen. “Donor milk really supports the process since another one of the ten steps to being Baby-Friendly includes giving no food or drink other than breast milk unless medically indicated. Then in 2014, we also started collecting data on exclusive breast milk feeding for the Joint Commission. Using donor milk is one more way we can support mothers in reaching their breastfeeding goals while also striving to improve our breast milk feeding rates.”

In 2015, Brigham and Women’s designated a separate postpartum donor milk program. The program’s first funding came from families who had graduated from the hospital’s NICU and wanted to support hospital programs as a way of expressing their appreciation. The postpartum unit continues to receive donor milk funding through grant and discretionary funds but with 6,200 births annually, their goal is to ultimately incorporate it into the unit’s budget.

“One family story stands out as a special success, among many,” Jen described. “There were twins who received donor milk as a bridge to breastfeeding. One was in the postpartum unit, while the other was in the NICU. Their mother worked hard to pump and establish her supply, and the twins were both fed donor milk for their first ten days, which enabled them to be exclusively breast milk fed.”

In another happy circumstance, a family was so grateful that they reconnected after a few months of leaving the hospital and donated $1,000 to the donor milk grant fund. They had gone home with some bottles of donor milk on hand to use as a bridge to breastfeeding but ended up having leftover milk because the mother had successfully established her milk supply.

What Other Hospitals Should Know About a Postpartum Donor Milk Program

A key challenge is that sometimes administrators or doctors are skeptical. Jen advises that when this happens, it’s important to focus on education about the value of human milk. “Donor milk is pivotal as a substitute for mother’s own, especially if she’s struggling to breastfeed,” said Jen. “It’s important to keep up-to-date with the evidence and newest research, as well as to align our infant feeding policies with the latest evidence.”

It helps to involve all key parties in the decision about using donor milk so that it’s an interdisciplinary effort across physicians, nurses, educators, hospital administration, and others. “Engage everyone at the beginning because it’s a multi-step process,” said Jen. “The more people invested at the beginning, the smoother it is. The milk bank does a great job of visiting staff and supporting them through the process.”

“Another amazing benefit of having a larger postpartum donor milk program embedded in a teaching hospital is that we have begun to examine and publish research about our program. This has allowed us to contribute to the growing body of literature about donor milk in the term infant.”

Another helpful tool is that when hospitals implement the Baby-Friendly Hospital Initiative, physicians are required to apply some of their continuing education credits toward breastfeeding. “That too can help affirm the power of exclusive breast milk feeding and donor milk use,” said Jen.

“Probably the most important factor are nurses,” she emphasized. “They are at the crossroads, as they are empowered to implement the whole, multi-step process. In our hospital they really embraced donor milk. They are willing to bend over backwards for something that a mother wants. There was an adjustment period at first, but now it’s an accepted part of their postpartum care because they see the impact it has on mothers and babies. I can talk about it all day, but seeing their patients successfully have their needs met is what drives them.”

About Brigham and Women’s

Brigham and Women’s Hospital has a Level III neonatal intensive care unit (NICU). Related surgeries are conducted at their partner, Boston Children’s Hospital, while the medical management of cases is conducted at Brigham and Women’s. Patients travel from all over the world for surgical care and medical management at the two hospitals. Brigham and Women’s has 30 labor rooms, six operating rooms, and 60 postpartum beds. The recently remodeled NICU can accommodate 60 infants, with private rooms to allow families to stay together 24 hours a day. The hospital heavily focuses on family-centered care.

Last year, there were 6,200 births at Brigham and Women’s, making it the largest birthing hospital in the greater Boston area, a point of pride as a community-oriented university hospital that conducts research. Brigham and Women’s is part of the Partners HealthCare network, which includes multiple hospitals that provide birth services. The hospital is proud to have partners throughout New England who also use donor milk, such as Massachusetts General Hospital, Newton-Wellesley Hospital, and North Shore Medical Center.

Jennifer Riley, RN, IBCLC, has been a nurse for 20 years and a board-certified lactation consultant for 12, working in postpartum care for most of that time. She started at Brigham and Women’s 15 years ago as a postpartum staff nurse. Jen is now a member of the postpartum unit’s lactation support services team, where she administers and advocates for the use of pasteurized donor human milk. She likely first heard about Mother’s Milk Bank Northeast through the Massachusetts Breastfeeding Coalition and the broader lactation community. She has served on the milk bank board for 2 years, and is currently president-elect, with her term starting in 2019.

Thoughts as Incoming President of the Milk Bank

“Being on the board gives me the ability to more clearly speak on the topic of donor milk. I can answer questions and advocate more for the program and my patients, and confidently answer any questions regarding donor milk in our greater lactation community as well,” Jen said. “Having the opportunity to attend the milk bank’s medical board meetings allows me to keep up on the latest research, which is especially useful in advocating for how important donor milk is clinically.”

As someone using our services on the hospital floor, Jen brings a special perspective, as she can give other board members a sense of how mothers feel and what hospitals think about as they start up their donor milk programs. She is one of the milk bank’s top go-to people for questions on ensuring high-quality services to our hospital clients.

Thank you, Jen, for all you do, and welcome to your incoming role as milk bank president!