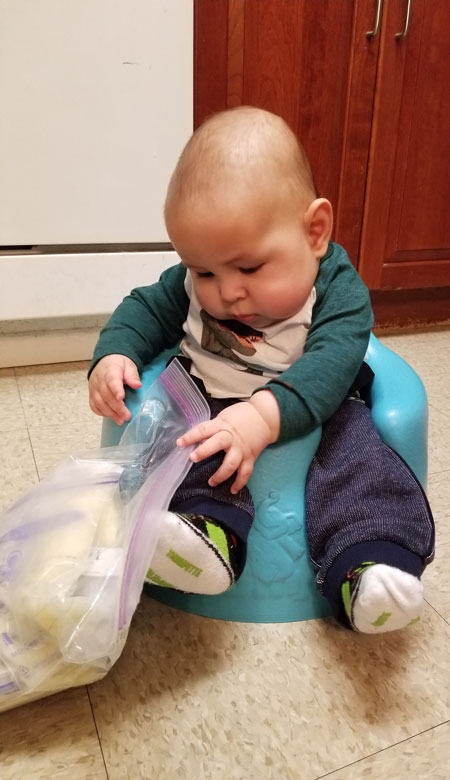 George V, aka Five or Cinco.

I donated milk after hearing the tragic story of my sister’s friend’s babies in Venezuela. She had given birth to her twins, but three days later she unexpectedly passed away. Suddenly the babies had no food, and given the situation in Venezuela, nowhere to find food. I made a comment to my sister about them having my milk, but we all knew that was not possible. She then suggested the possibility of donating my extra milk, which I had pumped in preparation to go back to work, to the NICU where my baby, Cinco, had spent the first two days of his life. I called the NICU and that is where I found out about Mothers’ Milk Bank Northeast.

I, by no means, have lots of milk production. In fact, I struggled with nursing at the beginning, with my baby not latching well so that it hurt, but I kept trying and sought out help to make it happen. I pumped at night when he was asleep to make sure I had enough supply for my return to work.

Once I made the commitment of donating, I started pumping a bit extra to have enough for both my baby and the milk bank minimum required. I kept thinking, and still think, about the babies with no moms and the babies I saw at the NICU where my baby had spent time, and that makes me proud of being able to feed my baby and of becoming a milk donor.

All the requirements to becoming a donor are painless when you think about the lives of those babies that cannot make it without our support.

Screening to become a breast milk donor is done through an easy four-step process. Once accepted for donation, milk can be shipped for free door-to-door or through one of our donor milk depots throughout the Northeast.