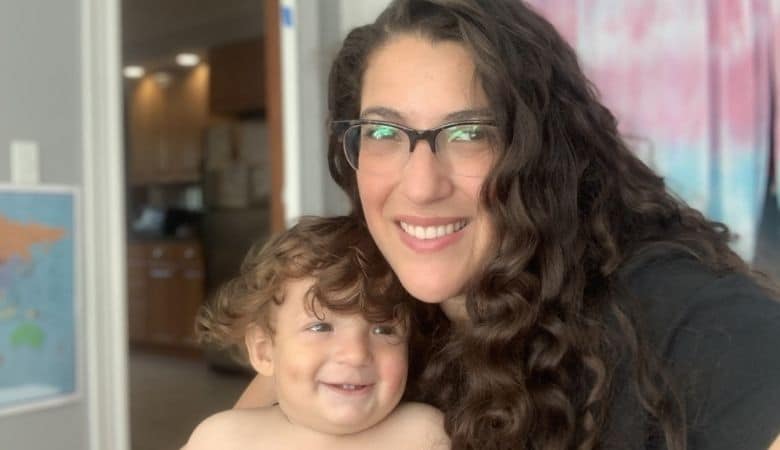 In March, a box of milk arrived decorated with stickers and messages—a special gift from Stacey and her family, decorated lovingly by little Zoe. It brought smiles to the staff during the trying early days of the pandemic. A few months later, our lab technicians smiled again when they discovered messages of encouragement written on milk bags from the very same family. We got in touch with Stacey to thank her, and asked her to share her story, starting with her first pregnancy and the early days of breastfeeding. Here is what she told us in a telephone interview.

All my pregnancies thankfully were very routine. I have a large age gap between my middle and my third . . . but thankfully I had three healthy pregnancies, three healthy deliveries, so I can’t complain about any of that. You know, I never really thought about breastfeeding, to be very honest. It never was something that I researched a ton in my first pregnancy. A week before Ezra was born, my husband said, “Do you think you’ll breastfeed the baby?” And I said, “Yeah, of course, why not?” . . . It just didn’t occur to me not to, but also I didn’t really know anything about it. 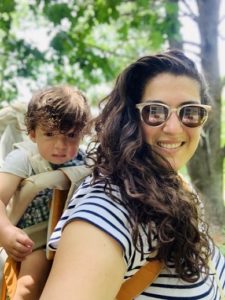 Then when I was on my maternity leave . . . I started reading everything, because you know, you’re sitting on the couch nursing for hours, you’ve got time to read finally. I started reading about breastfeeding and this whole mommy wars culture of breastfeeding vs. formula, and how everybody is looking down on the other side for whatever reason, and just I thought it was so unfortunate, because anything that divides particularly women, but people, is just so unfortunate.

The gift of abundant milk

I also had fire hose-level production of milk! But it was my first baby, so I didn’t know that wasn’t true for everybody. . . . I was the first in my circle of my friends, the first of my siblings to have children, the first of my cousins, so I didn’t really know anyone who had a baby. As I met more moms, and got more into a community of parents, I heard more and more people’s stories of how breastfeeding either was fine or really hard, and everything in between.

And I realized—oh my gosh, this is not true for everyone, and I have a really easy situation and kind of a gift that I’m really lucky to have! . . . It could be really hard and I just didn’t know that, and I’m kind of glad I didn’t know that because I might have psyched myself out about breastfeeding. But I was really lucky to have super over-milk-production that I didn’t realize was not standard and that really made breastfeeding easy for me. I mean, I change my shirt a thousand times a day but otherwise it’s easy.

I was pumping, and I was feeding, and I had a freezer full of milk, and I didn’t know anything about milk donation. And then when my son was about 15 months old we were moving and I said, “I have this milk in the freezer but it’s no good anymore. I can’t give it to him, and I feel so guilty that I’m throwing it in the garbage, and that feels wrong to me.” I’m saying this to other moms and they told me about milk donation, so I said, “Oh my gosh, I wish I had known about this, I could have been doing this all along.” And so I looked into it. I did a little research and I called the milk bank and they said, “You know what, no problem, call us when you have your next baby. It’s really going to be fine.”

Signing up to donate milk

So when I was pregnant with Zoe I called and I said, “Okay, sign me up!” and they said, “You have to have the baby first.” So after Zoe was born, I called, and we went through the procedures to sign up, and it opened a whole world for me when I really understood where the milk goes and all the all the work you all do at the milk bank. It was just the most amazing year . . . I donated till she was 18 months because I then stopped pumping. . . . That first 18 months was really eye-opening for me and I was thinking how I regretted that I didn’t know about this the first time around.

A birthday gift for the milk bank

When it was Zoe’s first birthday we asked for people to give monetary donations to the milk bank to match the milk donations we had given, and I’m so happy people decided to participate in that. . . . We do not need more toys in our house, so we always do donations for our kids’ birthdays, and we thought that was very fitting.

It’s a place that’s near and dear to my heart, basically, and when I was donating with Zoe, Ezra was two and he used to love to go to the milk bank to drop off the milk, because we are fortunate we live here in Newton, so we don’t have to ship it, we can just bring it from our freezer to yours. He was so cute; every time I’d say we were going to the bank, he would say, “Are we going to the milk bank, Mommy, or the money bank?” He definitely was learning the difference. He got to have a tour of the milk bank, and see what you all do there. Naomi gave him a tour and she had a stool for him to watch the people working in the lab . . . It was a really special part of our first year and a half with Zoe. 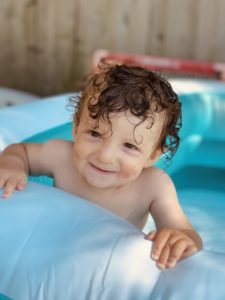 When I was pregnant with Zachary . . . as soon as I was settled [I wanted to] call the milk bank! I really wanted to do this again because it was such a meaningful experience for that baby time. I don’t know how long I will continue to donate; now I know you are accepting older babies’ milk, so as long as I’m pumping I’m so happy to be part of it. I feel like it’s such a blessing to be part of it. I feel fortunate to have the opportunity, especially because with Ezra I wasted so much milk that could have gone to babies who needed it. So I feel very lucky to have the ability to do it.

I found the screening process very easy. On my end, literally the only thing I had to do was fill out a form and get my blood drawn. The rest was my pediatrician and my OB. I found it to be very streamlined and easy. You’re on maternity leave anyway, so you’re able to go get your blood drawn. 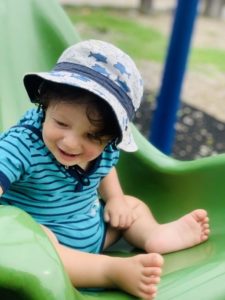 All my interactions with the staff have been amazing. Raechel Hackney—she’s amazing!—she was on the phone with me and she said, “You know what? You have three kids. I work out in your neighborhood; I’m there most every morning, so just let me know and I’ll come pick up the milk.” She would come to my house and she would hold Zachary while I went to the basement to get the box of milk. So lovely—talk about lovely interactions! That, I thought, was so sweet, above and beyond. She definitely did not have to do that. I could have totally brought it to the milk bank, but she was so sweet and lovely and amazing. So I have had nothing but wonderful interactions with the milk bank.

A freezer stash for babies who need it

When I was working I was naturally pumping. With both older kids being home while I’m on maternity leave I have to make an effort to pump, but it’s something that’s actually really, really important to me . . . Now I just feel like it’s so important to me to do it and I really want to make sure that it’s something I’m continuing because now we talk about, “Well, the babies need the milk. It doesn’t need to sit in our freezer. Zac has enough so we need to give it to the babies.”

It’s been so lovely . . . It’s motivating to see the stash in the freezer build up and to know it’s going to babies who really need it and that it’s being put to good use.

A note from the staff: during the pandemic, in-person interactions between donors and staff, as described in this story, are not possible. We look forward to a time when we can once again hold babies (with permission) and invite families for tours of the milk bank!