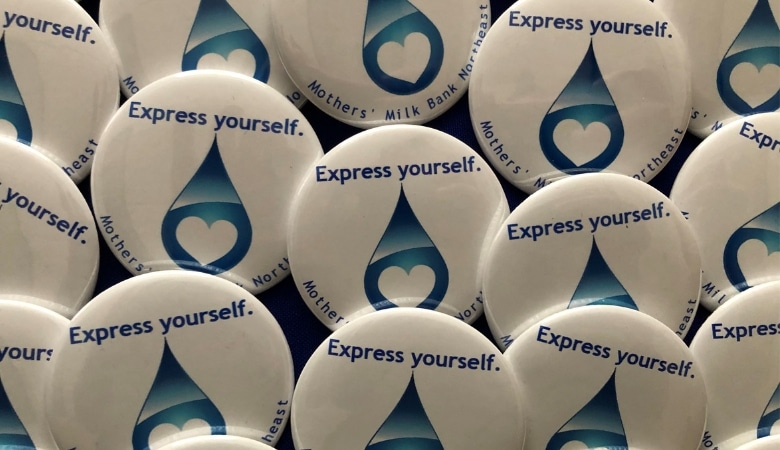 The Connecticut General Assembly is considering a bill (HB 7165) requiring Medicaid coverage of donor milk for premature babies in its hospitals. Part of the legislative process is public hearings before the committee to which a bill has been assigned. In this case it is the Human Services Committee, which oversees the Department of Social Services, and therefore, also Medicaid.

With less than a week’s notice, Mothers’ Milk Bank Northeast and our local colleagues rallied support from all over Connecticut. Some people attended the hearing and testified in person, and others submitted written testimony that is part of the public record, and which lawmakers review as they consider the bill.

When we were discussing the public hearing in the office one day, our office manager Jane suggested that we bring our pins with the words “Express Yourself.” What a perfect pun for this meeting! And so, at the hearing, we handed out “Express Yourself” pins to the supporters of HB 7165.

About 20 people testified in writing, in person, or both about the bill, including neonatologists, nurses, and lactation consultants, all of whom work with the premature babies we serve and see the power of human milk every day. Other community members testifying included breastfeeding advocates, milk bankers, and milk donors who have given milk to save fragile babies, and wordlessly and anonymously support their fellow new mothers to breastfeed.

The hearing ran from 11 am to 6 pm. Ours was the last bill on the agenda, so our testimony began at about 5:15. Committee members were attentive and interested, and they asked thoughtful questions about nine bills for almost seven hours. As we observed the committee all afternoon, their devotion to the work of passing the best legislation to meet the needs of the people of Connecticut was evident and inspiring. Our bill and the testimony on its behalf clearly moved the committee, and they are eager to learn as much as they can to make the best decision.

As the bill moves its way through the necessary committees, debates and budgeting get more complicated. There are many bills requiring thought, consideration, and budget dollars that, as with many state coffers, Connecticut does not have. Our elected officials are called upon to make some hard choices and they rely on input from experts, their colleagues, lobbyists, and their constituents to help make them.

Express Yourself: Make Your Voice Heard

Pirkei Avot (Principles of the Fathers, a Jewish text written in the second century CE) 2:21 teaches us, “It is not incumbent upon you to finish the task, but neither are you free to absolve yourself from it.” We cannot answer the call for signatures and action for every cause that crosses our inbox. But that is not a reason not to participate at all. As citizens, our voices matter: our voices are crucial to our legislators’ ability to govern effectively and fairly.

Find a cause that is meaningful to you, to which you have something to add—professional knowledge, a personal story, experience, or perspective—and make your voice heard.

Legislation regarding various aspects of breastfeeding and donor milk is coming up in Connecticut, Massachusetts, and Maine in New England, and in many states across the country. What is your story? What can you teach us and our legislators? We and the babies and families we serve look forward to hearing your voice.