On June 18, 2019, Governor Ned Lamont signed Connecticut HB 7165, An Act Concerning Medicaid Coverage for Donor Breast Milk, which had passed both legislative houses unanimously. It became effective July 1. The Department of Social Services is now working out details of coverage and budget. On average, bills take five years from first introduction to becoming law. HB 7165 was introduced and passed in the same session.

HB 7165 is an inspiring story of advocacy, democracy, and teamwork in action. Each of us, as individuals, can make a difference. Together, we are unstoppable.

Di Masters, mother of seven now-grown breastfed children, is pursuing her master’s degree in public health. She took a course in maternal and infant health and learned there about milk banks. “I was fascinated, and started looking into it more deeply—learned about prematurity and NEC and I realized this is an important public health concern,” Di commented. “There are hospitals in Connecticut that serve primarily Medicaid patients that do not use donor milk because they can’t afford it. This is an issue of equity and access.” Di was moved to act.

Di has been in public service locally and statewide for many years. She ran against incumbent John Frey for state representative in 2012, and lost. But she and John became friends. In the most recent election, John asked Di for an endorsement, and she asked him to help her push forward a bill requiring Medicaid coverage for donor milk in cases of medical need. With this unlikely friendship, HB 7165 was born in September 2018.

As with many bills, there were multiple parties interested in the bill, what it would cost, what/who was covered, and what/who was not. Over several months, through discussion, education, emails, meetings, and phone conversations, the bill evolved to its final form.

Moving testimony from parents and professionals

On February 28, 2019 the Human Services Committee held a public hearing about the bills before it, including HB 7165. About 20 medical providers, hospital administrators, milk donors, and parents of milk recipients offered scientific, financial, medical, and very moving personal testimony supporting HB 7165. Among the supporters were neonatologists from Yale New Haven Hospital and Connecticut Children’s Medical Center and representatives from the Connecticut Breastfeeding Coalition and Acelleron Medical Products, which hosts three of our milk depots, including one in Connecticut. Stephanie DeMarco, a two-time milk donor, shared her story of milk donation after the loss of her daughter Willhemina in 2017 and after the birth of her healthy son Octavius, then four months old. She challenged legislators and all present to join her in playing their role in the equitable distribution of donor milk to Connecticut babies.

In the Connecticut General Assembly, the bill passed out of committee to the full legislature. There was discussion about the bill itself and which other committees might need to review aspects of the bill. In the community, advocates fanned out via social media, email, and personal conversations, asking people to contact their legislators, tell their stories, and support the bill. Colleagues, friends, relatives, parents, and grandparents responded, making it clear to their representatives that HB 7165 was important, and needed support. Access to medical services such as donor milk should not depend on one’s income, ethnicity, birth hospital, or zip code.

The bill passed unanimously in both House and Senate, an inspiring feat in these divisive times. With Governor Lamont’s signature, the bill became law.

A team of people, many of whom do not know one another, each with his or her own expertise, story, involvement, and passion, worked together to help babies throughout Connecticut receive lifesaving, health-enhancing donor milk when they need it most. Each individual team member made a difference. Together, as medical providers, milk bankers, parents, lobbyists, advocates, and legislators of all parties, we moved a mountain, and removed one health care barrier to access. 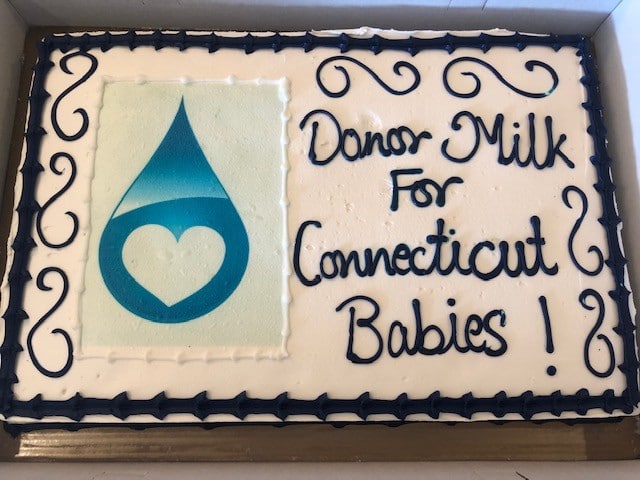