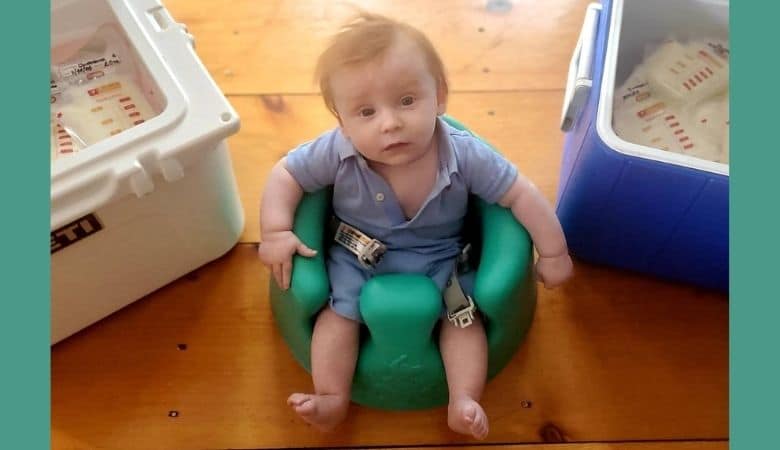 Jack with our first milk donation. We dropped this donation off on December 30, 2020 to cap 2020 off in the right way!

It is the night before my son Jack’s first birthday; it was my goal to provide Jack with breast milk through his first year of life, so it seems like a good time to reflect on our breastfeeding journey. I never planned on being a milk donor, but I am so grateful for every step that led us here.

My labor started out exactly how I wanted. I stayed at home for the first nine hours, taking baths while listening to music and surrounded by plants. When the contractions started to get closer together, we headed to Newton-Wellesley Hospital. where I continued to take advantage of the bathtub and music to keep me in a meditative state. After 31 hours of labor, including four hours of pushing, Jack’s heart rate continued to drop. We were told that it was now necessary to deliver Jack via caesarean. After about 30 minutes in the operating room, my husband fainted and I had no idea why. As I lay helpless with my arms outstretched on the operating table, I found out that Jack was delivered, but he was born completely limp and not breathing.

After two hours, we were taken to see Jack in the NICU. We were informed that he likely had suffered two seizures, one during labor and another shortly after delivery. The care team said that he would need to be MedFlighted to a higher level NICU at Brigham and Women’s Hospital, where he could receive therapeutic hypothermia treatment in an attempt to reverse any brain damage.

Unfortunately, there were no beds for me at Brigham and Women’s Hospital, so it would be two days until I could see Jack. I remember sitting in my room in the postpartum unit at Newton-Wellesley Hospital, hearing all the nearby babies cry. Since Jack was taken to another hospital within hours of his birth, I had not yet seen Jack for more than twenty minutes and I had not yet heard the sound of Jack’s cry. I cried in my room while promising myself that I would never complain about Jack crying. 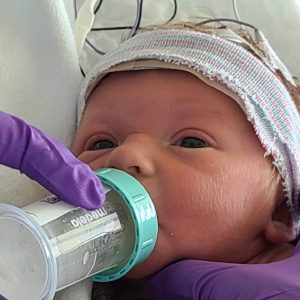 Trying milk and opening his eyes for the first time

While Jack was in the NICU, I was lucky enough to get daily visits from the hospital’s lactation consultants, sometimes more than once per day, even after I had been discharged. I had elevated levels of the hormone prolactin for several years leading up to pregnancy, so it was no surprise when I became engorged with clogged ducts quite quickly. The lactation consultants helped me work out the clogged ducts, and also helped me create a pumping plan and collect colostrum via a syringe while Jack was on a feeding tube. They later helped facilitate nursing when we were finally able to hold Jack. After my milk came in and Jack was cleared to nurse, he opened his beautiful blue eyes for the first time!

During one of our daily visits by the lactation consultants, I mentioned how grateful I felt that we were able to visit Jack daily at the NICU so that we could encourage the breastfeeding relationship. The lactation consultant mentioned that many of the NICU babies received donor milk from a milk bank in Newton. By receiving donor milk, the babies could get the benefits of breast milk even if their parents were unable to physically visit every day.  As soon as I heard this, I knew I wanted to donate. 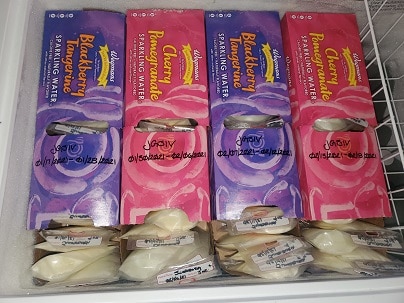 I used seltzer boxes to organize and stack milk in the freezer.

I contacted Mothers’ Milk Bank Northeast as soon as I was eligible to donate. After such a traumatic birth experience where nothing, including my newborn baby’s health, was within my control, the whole process was therapeutic for me. With Jack now home and a spectacular latch, pumping after breastfeeding was one aspect that I was finally able to control.  I loved organizing my milk in colorful seltzer boxes in our standalone freezer. I loved taking pictures of Jack with each milk donation and seeing how he grew between each donation. I loved talking to Jack, while putting the milk into storage bags, about how his sharing of my milk was helping his friends at the NICU.

After my first milk donation of a little over 300 ounces, I made an arbitrary goal for us to donate 1,000 ounces. I figured that 1,000 ounces would leave enough stored milk to feed Jack through his first year after I weaned from breastfeeding, while also helping other NICU babies. Whenever I felt too tired to pump, I remembered walking the halls of the NICU and seeing all the rooms occupied by fragile babies, many of whom relied on milk donations. After eight months and four milk donations, Jack and I reached our goal of donating over 1,000 ounces. 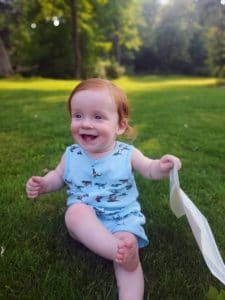 After a tumultuous start, I feel so grateful for the lactation consultants who continuously encouraged our breastfeeding relationship, whatever that looked like in those beginning days. Now a year later, I feel so proud of Jack and myself for reaching this point: a year of bonding through breastfeeding and a year of helping NICU babies like Jack. Although the act of pumping is not always the most enjoyable, I loved the feeling after each pumping session, knowing each ounce I pumped was going to nurture either my little baby, or another little baby who after trying milk maybe would open his or her eyes for the first time.