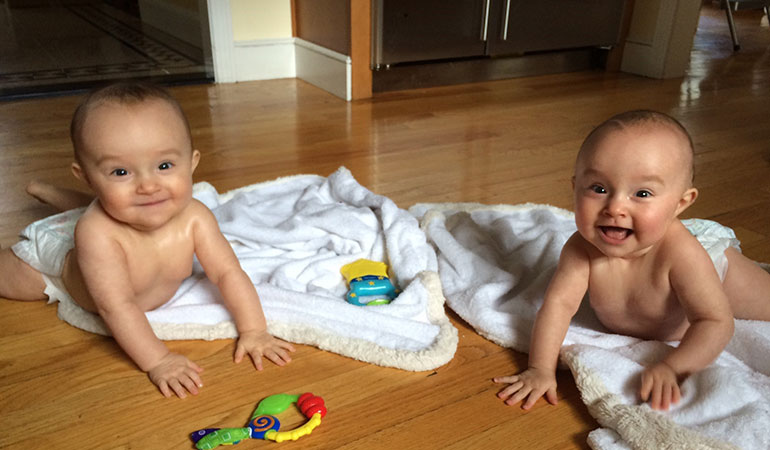 A mother’s urge to feed her child is a primal one.

Our identical twin daughters, Sasha and Jocelyn, were born at 36 weeks after what appeared to be an uncomplicated pregnancy. Right after their birth, we learned our daughters had developed an undetected form of Twin to Twin Transfusion Syndrome while in the womb. Jocelyn was quickly admitted to the NICU for complications, but Sasha managed to stay in the room with us. I knew getting the babies enough milk was critical and my supply was not in. I did not want the hospital to give formula to our newborns. Sasha and Jocelyn’s older sister had a formula intolerance as an infant that ultimately led to a hospitalization and other issues. I relactated in order to provide her with pumped breastmilk and was very adamant that her sisters would be breastfed.

I was so grateful that Brigham and Women’s Hospital was able to provide the babies with pasteurized donor human milk from Mothers’ Milk Bank Northeast while I worked to establish my supply. This was something I advocated for strongly, and they listened. Donor milk is not automatically given to babies born at 36 weeks, but we made the case for it. When we were discharged from the hospital, doctors suggested we contact Mothers’ Milk Bank Northeast directly to ask for donated milk to ensure we had enough for the girls while my milk continued to come in. At this point, I was feeding them both at the breast, then pumping, then bottle feeding. I had about 20 minutes of “down time” per feeding cycle. It was exhausting. They would scream at my breast most feeds, but we kept trying. The donated milk allowed them to get what they needed, while buying me time and security. A mother’s urge to feed her child is a primal one.

Unfortunately, one day after the girls came home with us, they were admitted to the NICU at Newton-Wellesley Hospital for low temperatures.  I would talk on the phone with the NICU nurses while I pumped in the middle of the night, trying to calculate how many ounces I was behind them. The challenge to keep up felt insurmountable. This time, I provided the hospital with my milk and pasteurized donor human milk. Within another week, my supply had caught up with Sasha and Jocelyn and the girls were back home and doing well. Feeding at the breast was still a struggle.  I continued the feed-at-the-breast, pump, feed-from-the-bottle cycle for one month.  During this time, I was also dealing with postpartum hypertension and had to juggle doctors’ appointments and regular home nurse visits. For me, pumping made the most sense as I attempted to get my babies enough milk and balance the needs of my 2-year-old. Once again, I became an “exclusive pumper,” as I had been for my first daughter. At about six weeks old, we learned Sasha and Jocelyn were suffering from GERD and colic. Jocelyn also had a milk protein allergy (along with soy and nuts). I cut dairy, soy and nuts from my diet and continued to pump. Their conditions improved, and the girls thrived.

Today, Sasha and Jocelyn are round, delicious, happy balls of joy. At 6 months, they were introduced to some formula and tolerated it well. At one year, they began drinking cow’s milk and now, at 16 months, they eat pretty much everything under the sun. Having a newborn is hard. Having two newborns is harder. I wish our breastfeeding journey had been simpler, but it got them where they needed to be. We could not have done that without the generous donations from mothers who have more milk than their babies need. Donating milk is such a priceless gift. I was so fearful that Sasha and Jocelyn would wind up with the same complications that led me to relactate for their older sister. They didn’t. I truly believe it is because we chose breast milk for them, and Mothers’ Milk Bank Northeast helped us do that.