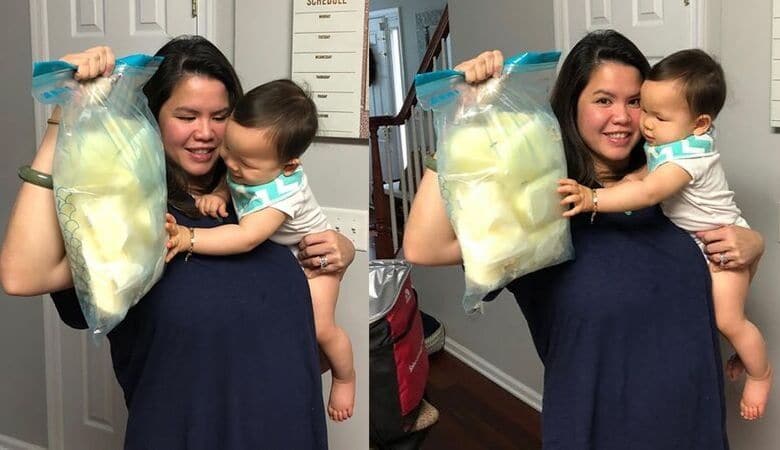 New Jersey nurse Gidget Romero was the first mom to donate milk to our new depot at Saint Barnabas Medical Center, where she works in the oncology department. After speaking at the depot’s opening event, she told us the story of how she came to be a milk donor, finally giving back after years of heartbreak.

Gidget grew up in the Philippines and moved to the United States after high school. She attended nursing school at Seton Hall University, and started her career at Saint Barnabas. She and her husband (whom she’d known since they were four) married in 2013, and soon got pregnant. Sadly, at a routine three-month check-up, her doctor could hear no heartbeat. The doctor assured Gidget that since she was young and healthy, she would surely conceive again soon.

A year and a half passed. Gidget’s obstetrician referred them to the reproductive medicine center at Saint Barnabas. After another year and a half, and two rounds of treatment, Gidget and her husband resigned themselves to accepting that they might never conceive a child.

Time passed. As a busy oncology nurse, Gidget energetically embraced 10- and 12-hour shifts, where she spent much of the time on her feet. In early 2018, suddenly she was battling severe fatigue. Baffled by her uncharacteristic lack of energy and unsure of the cause, she told her husband she thought she had Lyme disease. Jokingly he replied, “Or you could be pregnant!”

Gidget discovered an expired pregnancy test in her medicine cabinet. She tried it, and lo and behold, it returned a bright positive result. “I was in total shock. I couldn’t even believe what I was seeing.”  She awoke her husband (“I threw the stick at him”), and they celebrated briefly, then “the scary part came back.” Like all parents after miscarriage, they feared they would lose their baby.

Given her history, her husband suggested she call the doctor’s office the next morning. They saw her that very day—and she is grateful they did. Blood tests indicated she didn’t have enough progesterone to sustain the pregnancy. The doctor prescribed progesterone, and Gidget visited the office frequently, sometimes every three to four days, for blood work. Finally, at 13 weeks, after many sleepless nights, her body kicked in. The baby was here to stay. “I was so happy. This is it. It’s really happening,” Gidget recalls.

Because of her high-risk status, she was referred to New Jersey Perinatal Associates, where she would go monthly for measuring, ultrasounds, and genetic tests. She passed with flying colors—until 24 weeks.  During a routine ultrasound assessment, doctors discovered a tumor on the placenta equal in size to the baby. Gidget now needed to come in twice a week for monitoring of the tumor’s growth rate. It was so close to the umbilical cord that it could impede the baby’s growth by restricting oxygen and nutrients flowing through the cord’s vessels. To add to her heartbreak and health burdens, she developed gestational diabetes that required constant vigilance.

A visit to the NICU

Gidget’s health care team prepared her for the possibility of delivering the baby as early as 28 weeks. They arranged for her to visit the Saint Barnabas NICU, for her peace of mind, in case her baby was born early and needed to spend time there. They wanted her to see how resilient preemies can be, that they can thrive with proper care. Gidget went to the NICU, met the staff, and talked with parents, some of whose babies faced graver circumstances than her own.

Human milk a cure for preemies

Gidget overheard a nurse talking about how human milk was a cure for these babies, and how it could prevent necrotizing enterocolitis.  Her “mother instinct just kicked in,” and she knew she wanted to give back by making enough milk for these babies as well as her own. When she spoke with parents of preemies, all she could think was “the one thing I want for these moms and parents is for them to enjoy their baby at home, and take them home, just like we were hoping for.”

Deciding on a milk bank

In her last trimester, she asked lactation consultant Terry Lastella about milk banks. Terry, the hospital’s Women’s Health Education Coordinator, gave her information, and Gidget supplemented that with her own research on milk banks. She learned about donor screening and safety protocols at Mothers’ Milk Bank Northeast, read the stories on our blog, and decided to donate to us. “You want the safest for your children,” Gidget says. “I just kept your information right at my bedside table, and then I was just waiting for the perfect time to make that call when I had enough milk.”

Eventually, the tumor stopped growing, but thankfully, the baby didn’t. Baby Gino—all 9 pounds of him—arrived by cesarean section at 39 weeks and 2 days.  Placental testing showed that the tumor was benign, and the pathologists discovered a second, flat tumor on the placenta’s surface.

Gidget was determined that breastfeeding and pumping would work. She reached out to Terry repeatedly for help with expressing and storing milk, because she was so motivated to save milk for donation.  “She became my support system,” Gidget says of Terry.

When Gino was almost five months old, Gidget went back to work, and by then she had enough stored in her freezer that she could donate milk at last.  She called our Donor Intake Coordinators to begin the donor screening process. Partway through the process, Gidget recalls Terry saying to her excitedly, “Guess what? We’re joining their team. We’re opening our milk depot here!”

Gidget could not contain her excitement, and her thoughts flew to the vulnerable preemies in her hospital. Gino had spent four days in the NICU because of a fever, and during that time, Gidget recognized babies still there from the time of her first visit at 24 weeks into her pregnancy. “I am so blessed that I was able to hold my baby and take him home.” She was driven to pump, and every time she did, “I wasn’t only thinking of my baby—I was also thinking of those babies that I saw in there. I’m just so happy I was able to make more.” Remembering those vulnerable babies, she says, “They need to come home with their parents.”

It was important to Gidget to drop off her milk at the new depot in her work place, to thank the hospital for its support before, during, and after her pregnancy. She was thrilled to speak at the inspiring grand opening event for the depot. The event also celebrated the hospital’s expansion of its donor milk program to include babies in the newborn nursery who may need supplementation briefly as their mothers establish their own supply of milk.

“That’s how I ended up being part of your family now. It’s like a full circle for me,” says Gidget. She has become an enthusiastic ambassador for milk donation, and advocates tirelessly among her colleagues at work.  “I am so happy that you guys do what you do.” Donating milk, says Gidget, is “my way of saying how thankful I am, despite the journey I had to go through.” 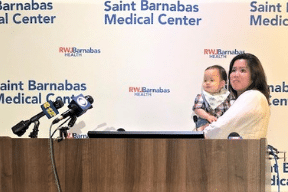