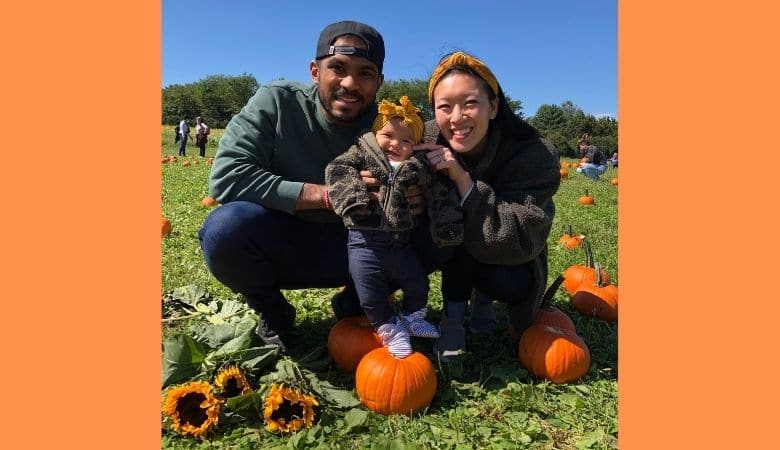 On the brink of the pandemic, Jacqueline, Rondeep, and Kali started their life together as a family, which has led them through exclusive pumping and more. Reading posts from other mamas while pumping has been a big source of support for Jacqueline, so now she’s paying it forward by sharing her own story.

Thanks for sharing your story, Jacqueline! Tell us a little about your background.

Kali is our first and was born March 6, just before lockdown and quarantine in New York City. I was fortunate to have a “normal” delivery in the sense that I did not have to wear a face mask, my husband was with me through labor and delivery and stayed in my room afterwards. Our parents were able to visit us in the hospital and in our apartment the first couple weeks. Little did we know, soon after she was born we wouldn’t be able to see anyone for months! I work for a tech company and my husband works for a consultancy and we’re both work-from-home at least through 2020. We’ve since made the move to the suburbs of New Jersey like a lot of families leaving the city. We were just losing our minds trying to both work from home in a one-bedroom apartment in NYC!

How did breastfeeding go for you early on? 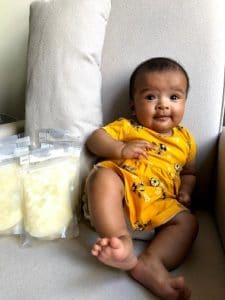 We took all the baby prep classes our hospital offered but it was very much a nursing/breastfeeding emphasis. There was a Medela Symphony pump in my recovery room in the corner that was never acknowledged or explained. I was handed a manual pump and told to just keep using it every 20 minutes but I didn’t understand why or what it was even doing. Kali only latched to one breast but every nurse reassured me that she’d just get it eventually. It wasn’t until we got home and my milk came in a day later that I was so engorged and in pain that I called a lactation consultant through Boober. She came over at like 9 pm! I had a Spectra S2 through insurance but no clue how to use it and she set me up for success. I started trying a combo, nursing/attempting to latch, then I’d pump while my husband bottle-fed previously pumped milk. Eventually I just stopped trying to get her to latch because it was frustrating for everyone.

So now you’re an exclusive pumping mom. How is that experience for you? 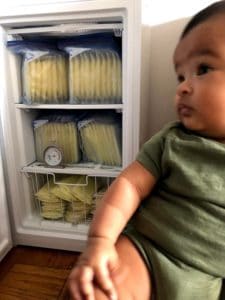 I really enjoy pumping!!!! I think it’s definitely because we’re all home and not going out much due to COVID, but I’m currently pumping four times a day and I think I can comfortably make it a year. If the world was normal and I was commuting into work and Kali was in daycare, it might be a different story.

How did you first learn about milk donation?

I posted in a mom group on Facebook about having an oversupply and they recommended Human Milk 4 Human Babies. It worked out a couple times but I had always wanted to donate/find a milk bank. as our close friends had NICU twins and one didn’t make it but they both received donor milk in their early days. I finally found Mother’s Milk Bank Northeast and applied! 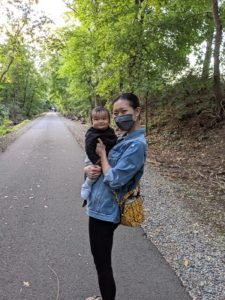 Kali at 6 months with Jacqueline

Grass is always greener, I suppose, but having an oversupply is also stressful! I purchased a small upright freezer to store my extra breast milk and that freezer quickly filled up even with donating to Human Milk 4 Human Babies. It was stressful having to post on their page and then coordinate with a recipient, especially during a pandemic! I love the predictability of working with Mothers’ Milk Bank Northeast. scheduling FedEx pick-ups. I also have high lipase; Kali does take frozen milk but just in case, donating to a milk bank is a great way to ensure the milk won’t go to waste!

How was the screening process for you?

Going to a Quest Diagnostics for bloodwork during a pandemic with a newborn was pretty stressful but everything was socially distanced with masks and I felt safe. I enjoyed the phone screening I had with the Mothers’ Milk Bank Northeast representative.

Tell us about your family’s experience around milk donation. 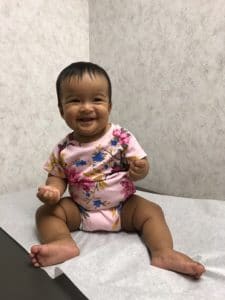 Totally new to us. I looked into selling it, looked into starting a breastmilk soap or lotion business (ha ha ha) but donating is the best route! I think I’ve opened our extended families’ eyes to it. Our parents’ generation was mostly encouraged to feed formula. They see me leave the room to pump and they see how well Kali is doing so they’re proud that some extra milk gets to go to other babies.

What would you like others to know about milk donation?

Thanks, Jacqueline! We know other exclusive pumping moms will learn a lot from your experience! 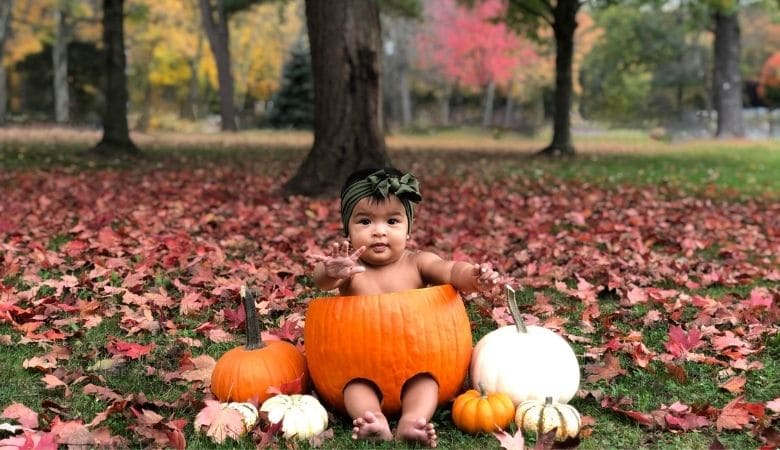